On Posted on August 3, 2022 by Terrance Hughes to Blogging

an instrument vehicle powered by air


two yamahas, one passion: by yamaha and yamaha motor

As part of Yamaha Design Laboratory’s project ‘Two Yamahas, One Passion’, an exploration of different ways of thinking around the common theme of design, Yamaha and Yamaha Motor have collaborated to release their new conceptual design object Untitled Instrument. The mobile musical object is powered solely by air, combining the theory of sound with the complex mechanisms of a motorcycle engine to devise a product that works as both a musical instrument and a vehicle. As Yamaha alters the flow of air in different ways, it becomes a tool that plays different roles; when controlled it can produce pleasant musical scales, and when compressed, it can be converted to propel motion, encouraging a free play style that is not limited to one or the other. 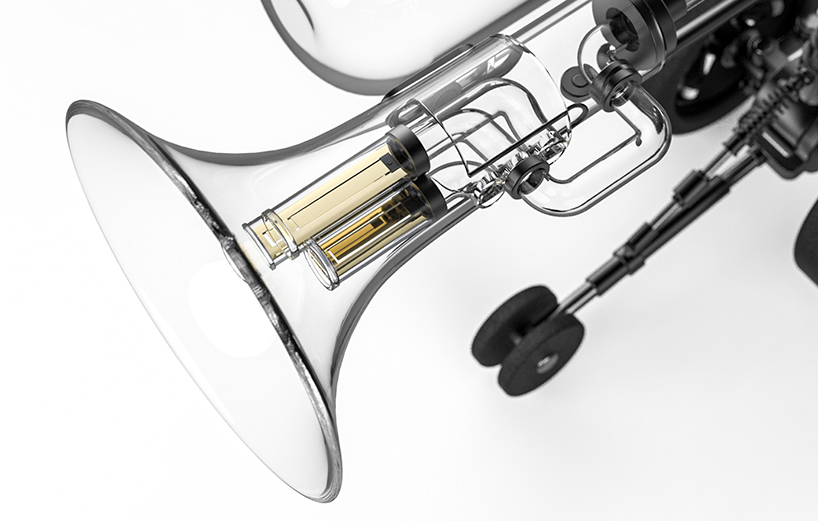 Two Yamahas, One Passion is an exploration of different ways of thinking around the common theme of design

all images courtesy of the author

a new concept powered by air

To fulfil Untitled Instrument’s function as a vehicle, Yamaha looks to the complex mechanism of a motorcycle engine, which is driven by air compression with the support of gasoline combustion. Air is efficiently compressed to produce force and pressure, powering the reciprocating motion of the piston, which is in turn converted into rotational motion through the chassis, generating propulsive force by spinning the crank and tires. If this air is converted into material vibration energy, it becomes a tool that produces sound like a musical instrument, and if it is converted into propulsive energy, it becomes a tool like a vehicle. Meanwhile, Yamaha also explores the phenomenon of sound waves in which the vibration of matter is transmitted through the medium of air, to fulfil the object’s function as an instrument. As the flow of the air is controlled and altered, a pleasant musical scale is produced. Although the same source, air, is used, the role of the tool changes drastically depending on how it is utilized. 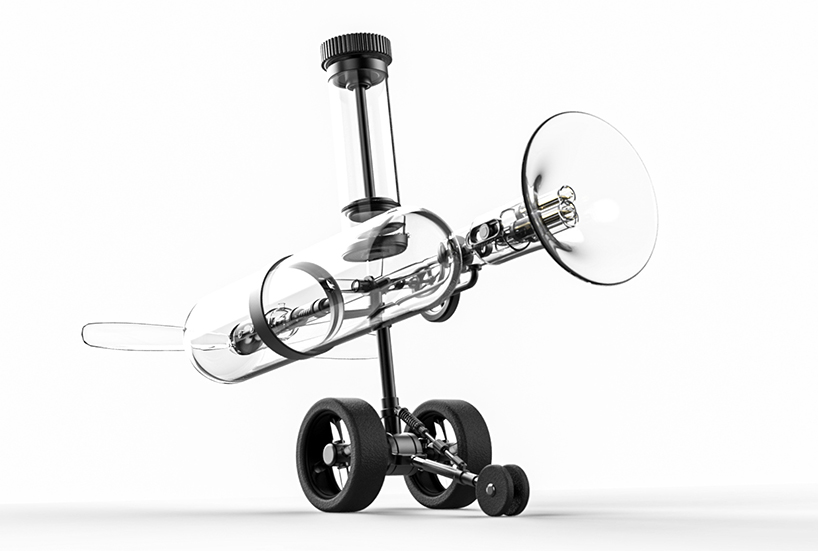 Yamaha plays with air in various ways, as a tool to create both sound and motion and allow Untitled Instrument to play different roles at once. As the air pump attached to the upper side of the main unit is pushed several times, air accumulates in the air tank located on the side. Then, by twisting the valve in the centre of the main unit and opening the air passage of the transparent tube, air is immediately released from the compression tank. The released air pressure is used to generate sound, while the air flowing into the trumpet-shaped tube is used to generate energy to vibrate the harmonica reeds attached inside. The air flowing into the other tube, to which the propeller is attached, is converted into the reciprocating motion of the piston, which rotates the crank and produces propulsive force, propelling Untitled Instrument to move forward. 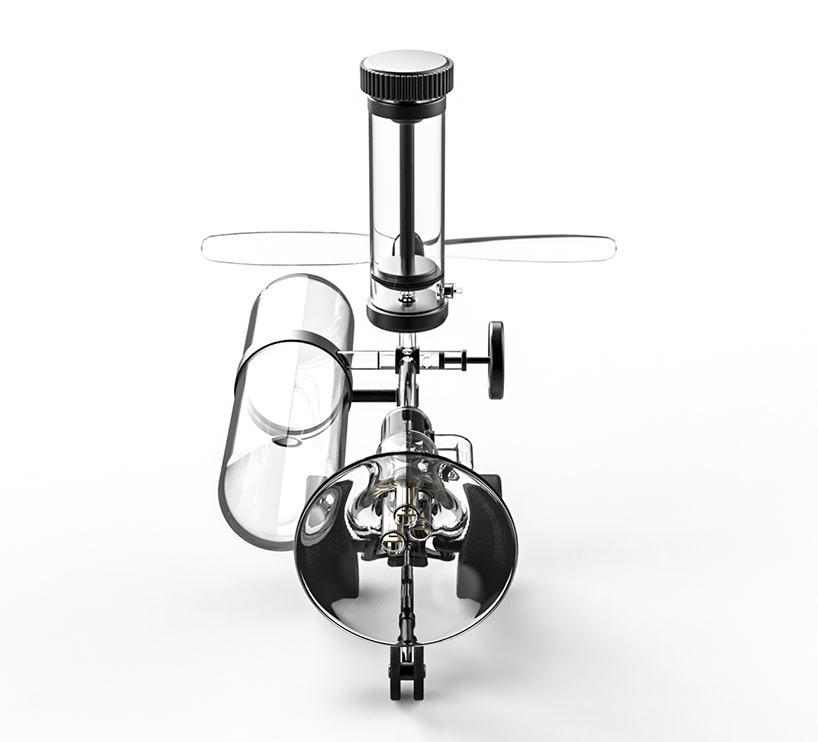 air is controlled to both produce pleasant musical scales, and to propel motion 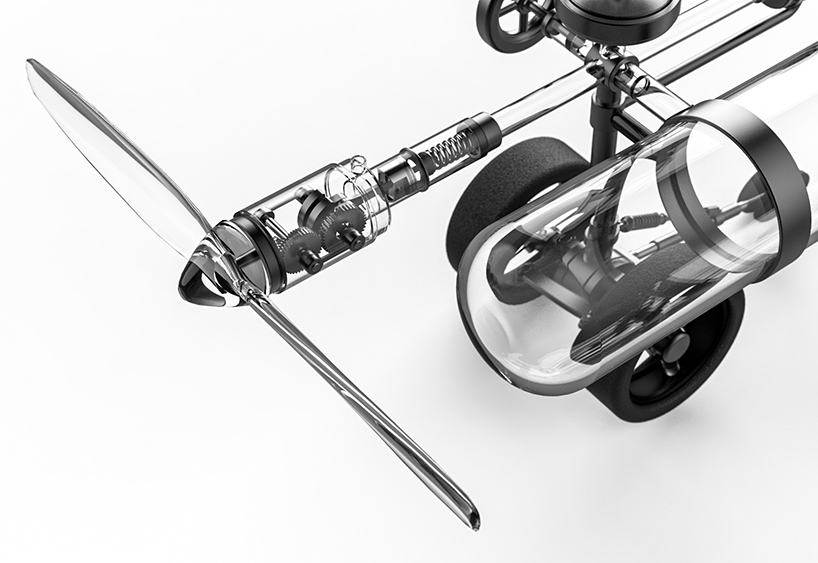 air is compressed to produce pressure, powering the motion of the piston 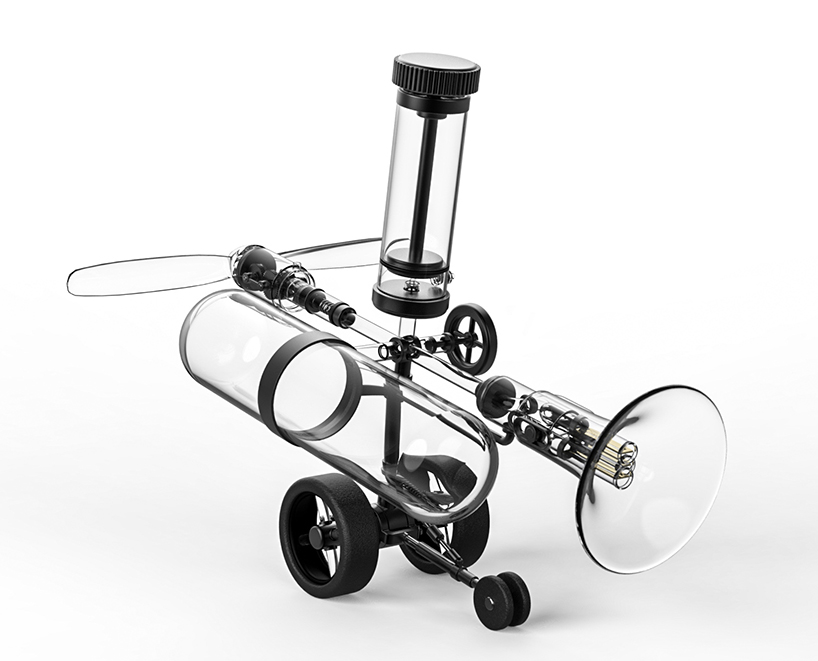 Yamaha looks to the mechanism of a motorcycle engine, which is driven by air compression and gasoline combustion