On Posted on August 15, 2022 by Terrance Hughes to Blogging

The biggest four-cylinder building in the world – BMW headquarters celebrates its 50 years standing as a landmark for Munich. Conceived as a milestone in the history of architecture, the pioneering project designed by architect Professor Karl Schwanzer in 1972 has become a permanent feature for the city’s skyline and the company’s corporate image. Together with the adjoining museum, a timeless spirit unravels. 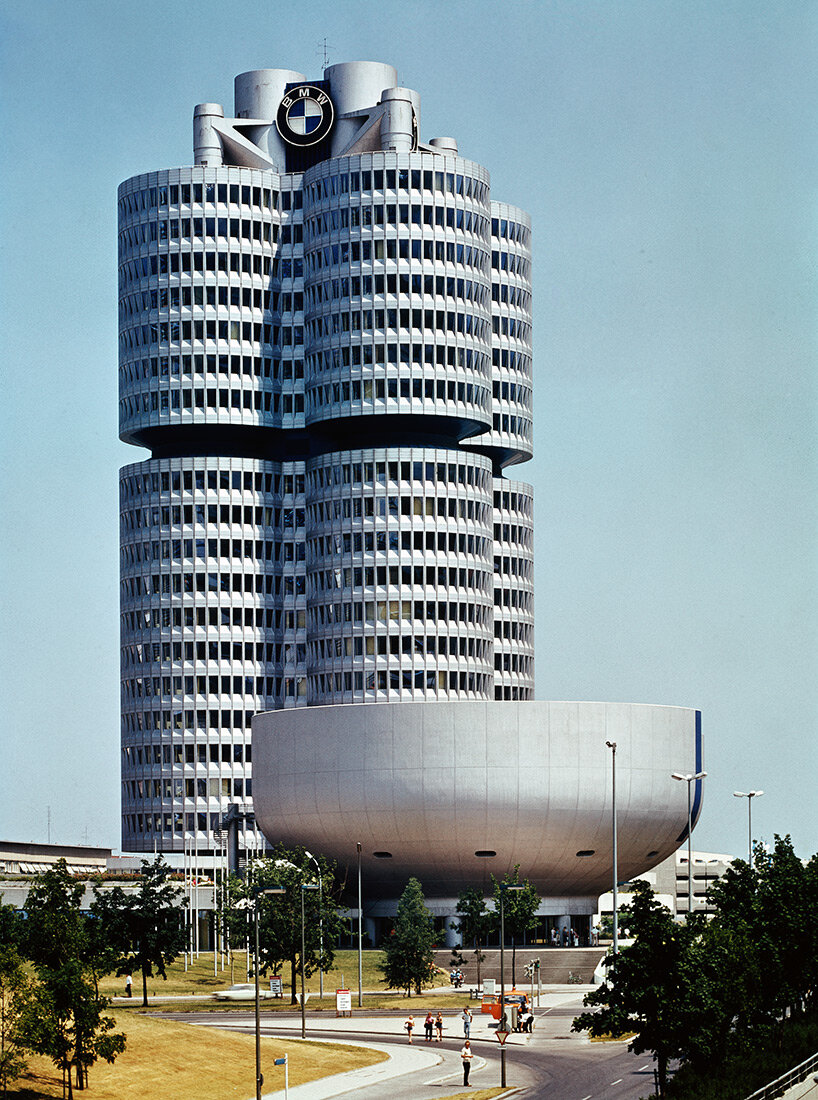 all images courtesy of BMW AG

The BMW Headquarters and adjoining museum complex not only marked the high point of Karl Schwanzer’s architectural career, they also set new benchmarks in the field of modern office architecture in the early 1970s. The Viennese architect’s design combined an impressive façade with an innovative and flexible spatial concept, and in doing so laid the foundations for an enduring architectural philosophy at BMW. Schwanzer’s tower furthermore epitomizes West German architectural design influencing since then upcoming civil engineering projects. Given its identity as an intriguing structure, the Tower marks an achievement of its period and continues to fascinate admirers to this day.

‘This is not a normal architecture. This is industrial construction – engineering construction. You do not have bricks that you mount together as you did centuries before. The building has a height of 99.5 meters.We have a strange law in Munich that says that our main cathedral, a wonderful Gothic building, has a height of 90.8 meters, and no other buildings may be as high as the cathedral,’ says Dr. Andreas Braun, curator of the BMW Museum, while standing right in front of the Headquarters. 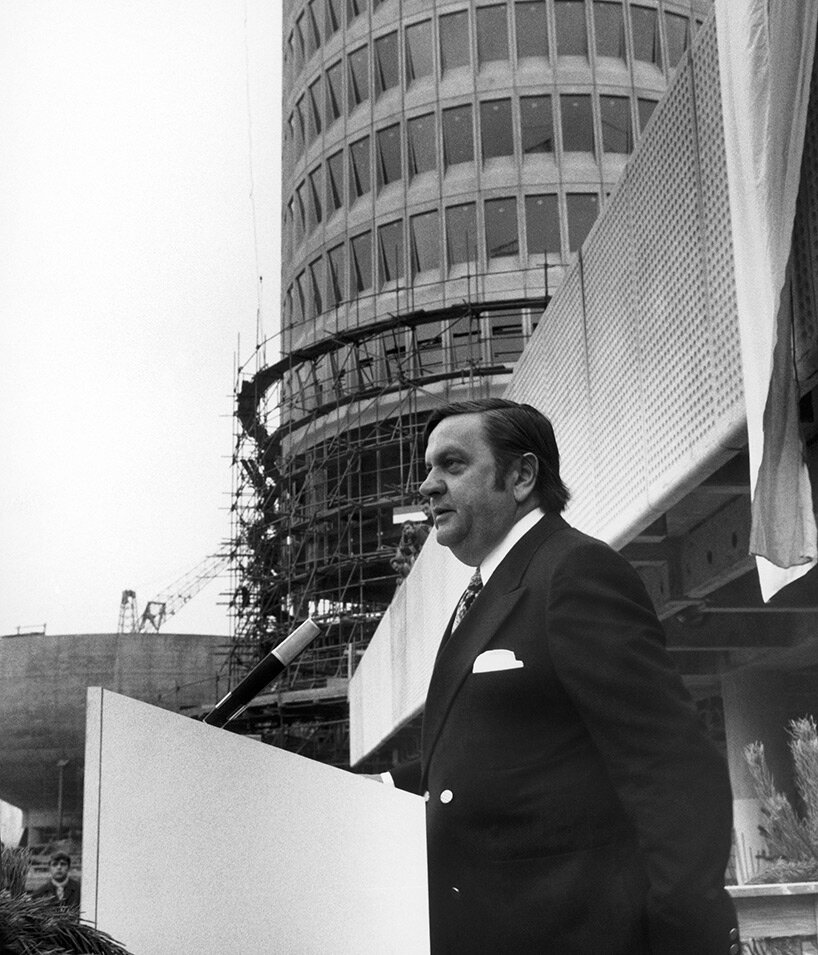 “Topping out” ceremony – address by Professor Karl Schwanzer (close-up photo from the righthand side), 1971 | photo by BMW Werkfotograf Attenberger, Karl

the competition that started it all

In April 1968, the BMW executive management launched a competition with a view to choosing a design for the new head office and invited eight architects with a proven track record in similar projects. The spatial planning had to take account of technological advances in administration and production and the continual changes these brought to workflows. Moreover, the new administrative complex required dimensions and a design that would not only reflect the importance of the company, but also blend in with other architecture around it. This consisted of residential buildings, the BMW plant, major traffic junctions and the future Olympic facilities. The judges were struck by architect Professor Karl Schwanzer’s 100-meter-high design and the rest is history. 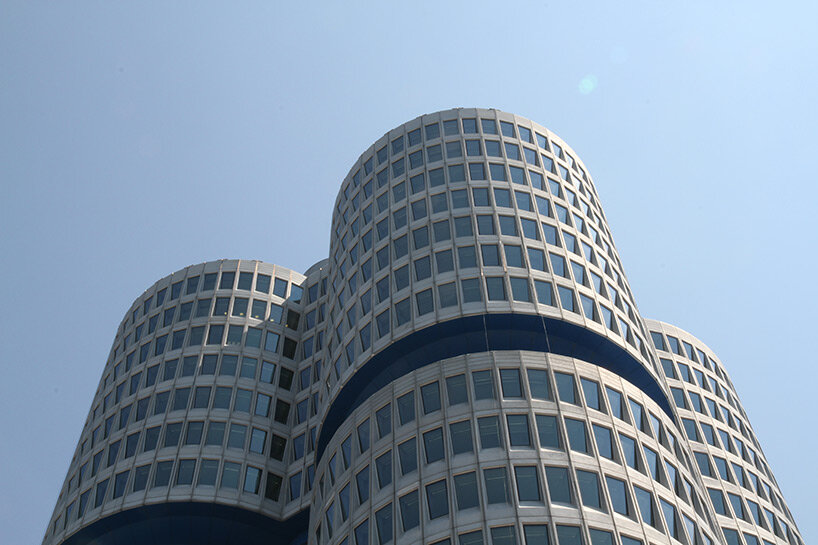 looking up to the four cylinders | image © designboom

Karl Schwanzer’s design drafts for the BMW Headquarters reveal the influence of his teacher, Oscar Niemeyer, as the similarity in the sculptural element of both the BMW Tower and the Brazilian architect’s Museum Bowl is evident. The Tower has a cloverleaf floor plan and forms both the high point and center of the ensemble of new buildings, while its height of 99.5 m was within the maximum stipulated by Munich’s inner city planning regulations in 1968. This restriction was based on the height of the towers of Munich’s Frauenkirche, which rise to 98.6m; the height of a building could not exceed 100 m. Its 22 stories are divided into 18 office floors, including two for the Board of Management, four technical floors, the ground floor and a basement.

‘This is not a normal architecture. This is industrial construction, engineering construction. You do not have bricks that you mount together as you did centuries before. The building has a height of 99.5 meters.We have a strange law in Munich that says that our main cathedral, a wonderful Gothic building, has a height of 90.8 meters, and no other buildings may be as high as the cathedral,’ says Dr. Andreas Braun, curator of the BMW Museum, while standing right in front of the Headquarters. 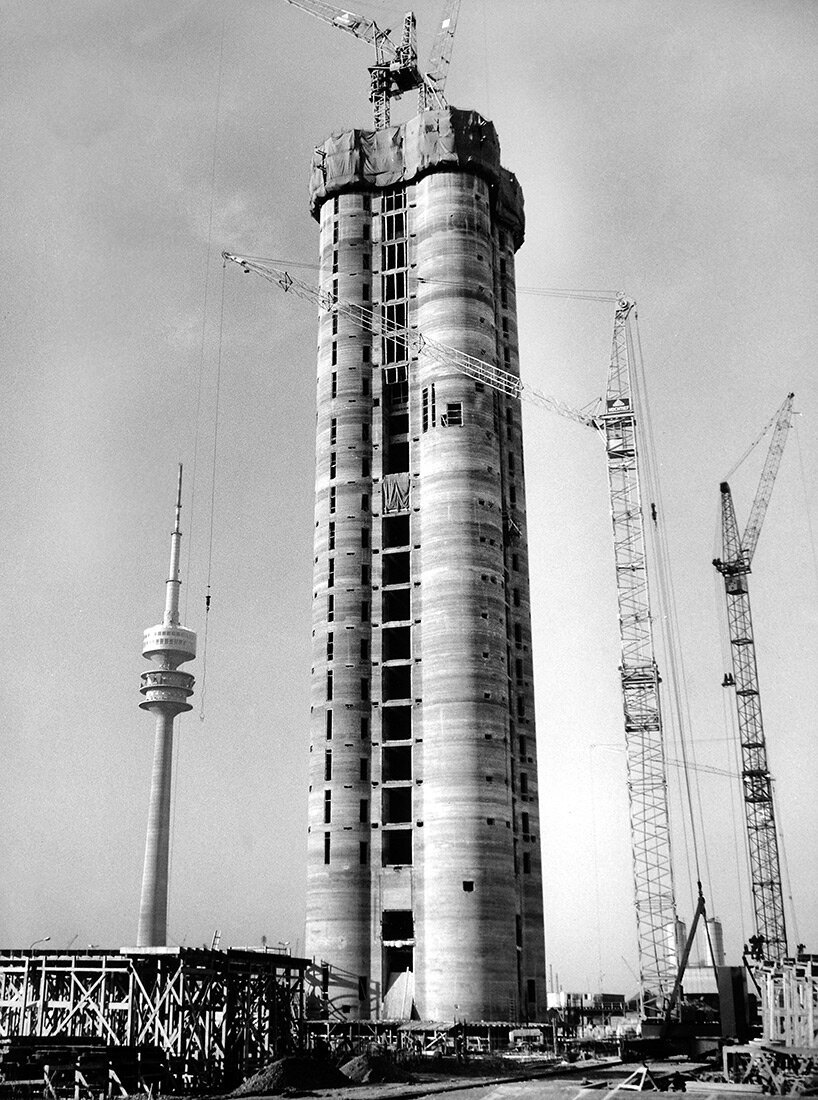 construction of the BMW ” Four Cylinder” – the core of the building, 1970 | photo by BMW Werkfotograf Attenberger, Karl

Instead of resting on foundations, the building was designed to be suspended from a cruciform steel beam construction on the roof. There were only a handful of examples of this type of suspended building worldwide, and none had ever been built to the height of Schwanzer’s design. In construction terms this meant that rather than being built conventionally from the bottom upwards, first the upper floors of the almost 100-metre-high building were completed. The four cylindrical elements were initially constructed at ground level, before being raised hydraulically and completed in several segments. 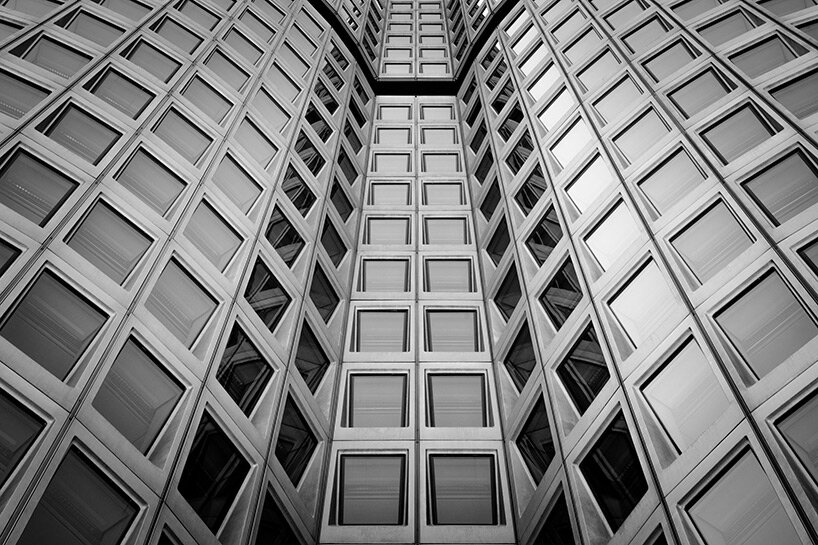 looking up the Tower | photo by Myrzik and Jarisch

Each cylinder was suspended from four giant crane arms positioned in the shape of a cross at the building’s central core, a tower shaft made of reinforced concrete and resting on very solid foundations. The major tensile and compression forces were absorbed by lattice girders made of reinforced concrete on a mezzanine level in the top third of the building and by vertical ties and compression columns running along the exterior façades – lending the entire design stability. This approach to design and construction gave the BMW Tower a light and distinctive silhouette, despite its impressive height and a suspended weight of 16,800 tons.