Domain Architects has rented and transformed an old school building into a high-end boutique hotel in the mountainous area surrounding the city center of Beijing, China. The site for the new Beijing MM Farm hotel was previously a primary school abandoned for years in a rural village, consisting of four rows of brick and timber frame houses surrounded by high perimeter walls. In order to preserve the original structure as it was found Domain Architects leave the facades of the cluster of buildings untouched, instead using 60,000 meters of removable hemp rope to ‘wrap’ around the hotel in a uniform, mesh-row pattern. A sustainable renovation project with a close to zero carbon footprint, the architects primarily use local and natural materials such as timber and hemp, and local labor for the construction.

all images courtesy of Domain Architects

Domain Architects utilize 60,000 meters of hemp rope to alter the existing facades of the Beijing MM Farm while barely touching the houses’ structures. Detached from the main volumes, the new façade wraps around the walls and gabled roofs, generating dynamic rich and dramatic lighting effect inside and outside, in both intended and unintended ways. Through the mesh of ropes, the original orange-colored tiles and walls are revealed in a changing degree as viewers change their standing points.

For the hotel, the Shanghai-based architecture studio employed a low-tech and light intervention strategy to reform the site experience. Strengthening the community connection with the village, local villagers -many of whom were not professional workers – were hired for the construction process, which was completed in only there months. The building materials were sourced from locations as close to the site as possible. The original, molding straw roof sheathing was replaced by wood board, and some minor changes of partition and fenestration were carried out. Due to the extensive use of natural materials such as timber and hemp rope, and short-distance suppliers, the carbon footprint of the entire renovation project is estimated to be close to zero.

Due to the rented space, Domain Architects wanted to renovate the structure consciously to avoid construction waste. ‘At the end of the lease period, this project will come to a much more environmentally friendly ending: all the steel will be recycled, and the hemp rope will be buried on site and return to dirt’, note the architects. ‘After helping this project to complete its ephemeral life, all the natural materials we used will also return to their life cycles in natural world.’ 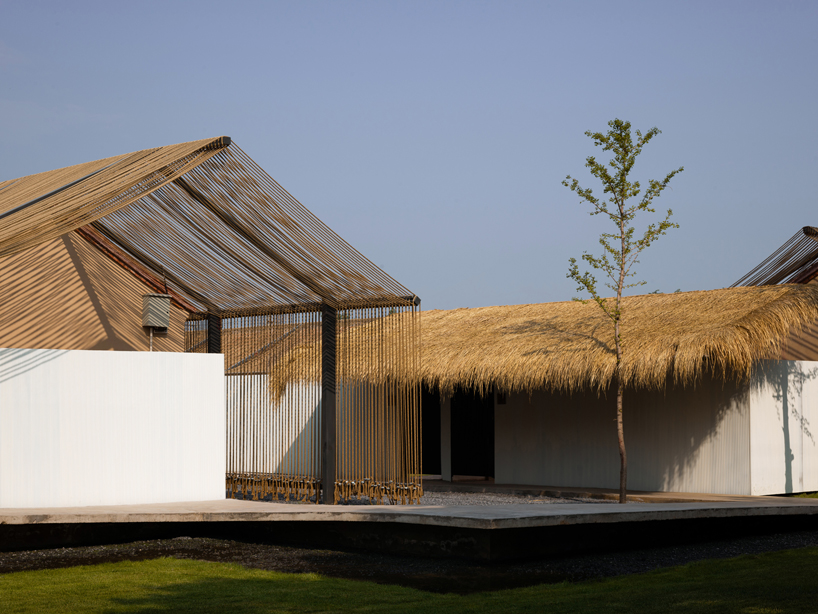 the facade is wrapped in 60,000 meters of hemp rope

The architects draw inspiration from the site’s natural context and close location to the Miyun Reservoir. As such, for their high-end boutique hotel experience they recreate an atmosphere of a waterfront settlement with a system of public paths elevated from the reflection pool, undulating in gentle slopes. Unintentionally, this created an interactive and enjoyable experience for visitors, with the various heights of the paths encouraging many ways of playing with water for both adults and children.

The area near the road side was transformed into a main entrance, and the first house from the south is used as a public space and service space, including the reception desk, restaurant, kitchen and staff housing. The other three houses serve as guest rooms, including six double rooms and five suites, each with a courtyard with complete privacy. Glass vitrines equipped with bathtubs or serving as tea rooms protrude from the guest rooms to enable guests to ‘dive’ into the courtyards and experience them in an immersive way. 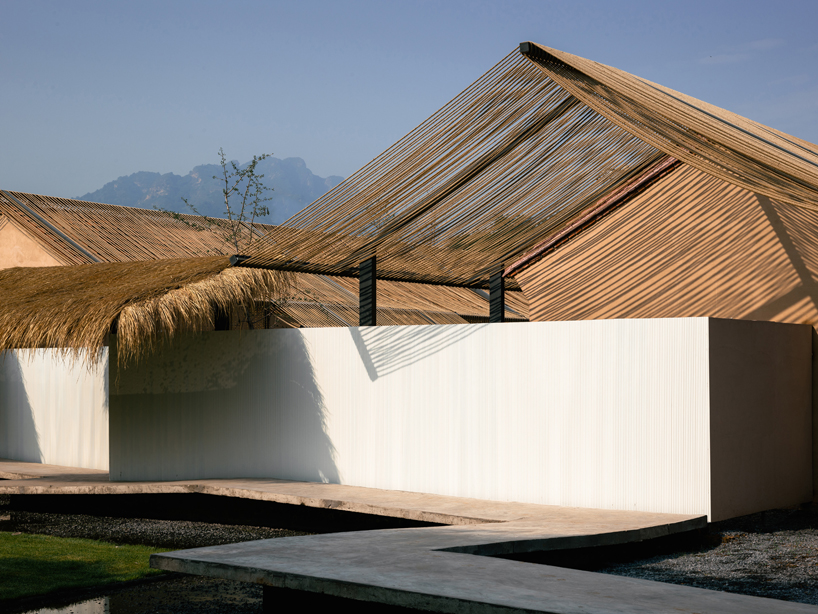 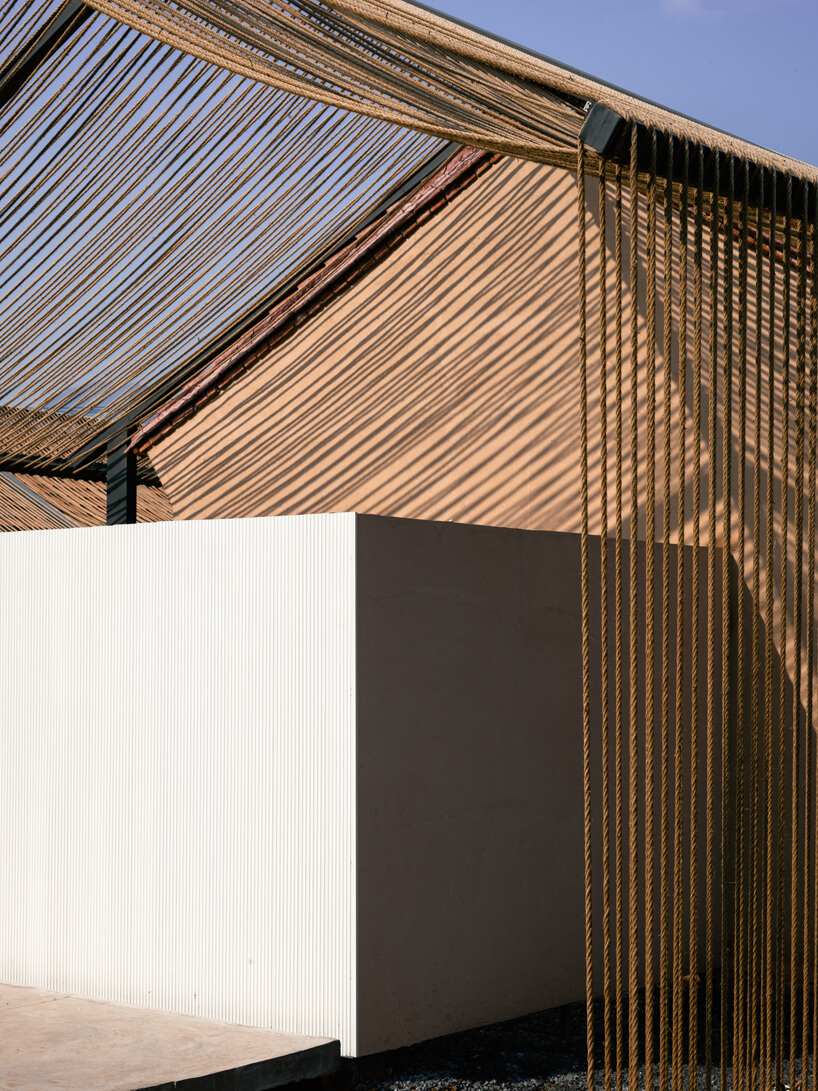 Domain Architects use 60,000 meters of removable hemp rope to ‘wrap’ around the hotel facade 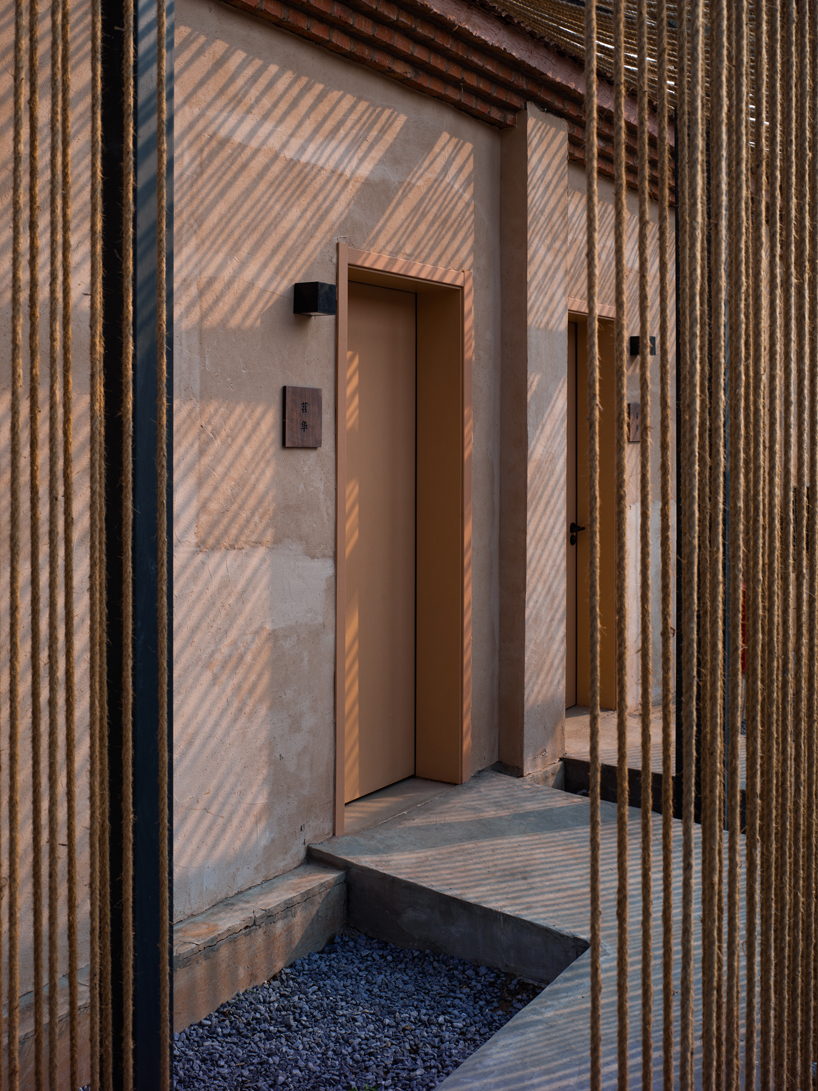 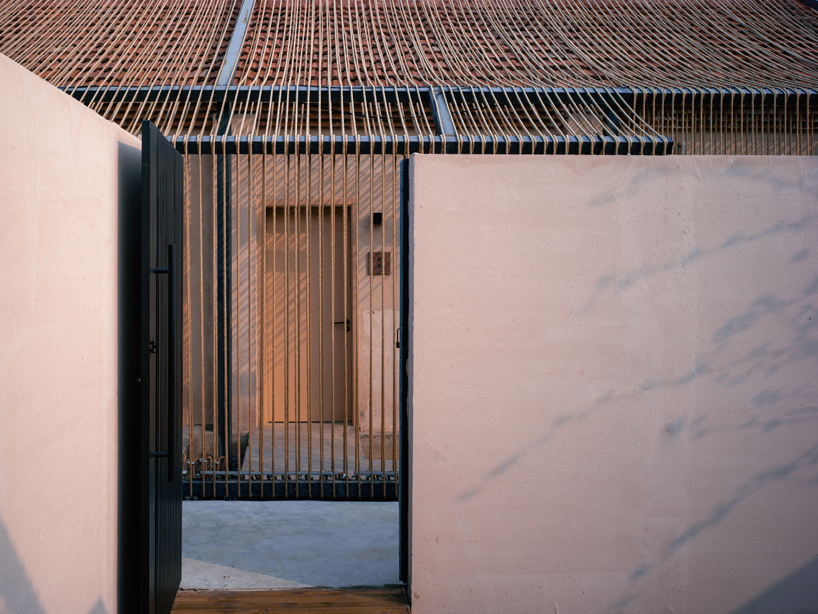 through the mesh of ropes, the original orange-colored tiles and walls are revealed 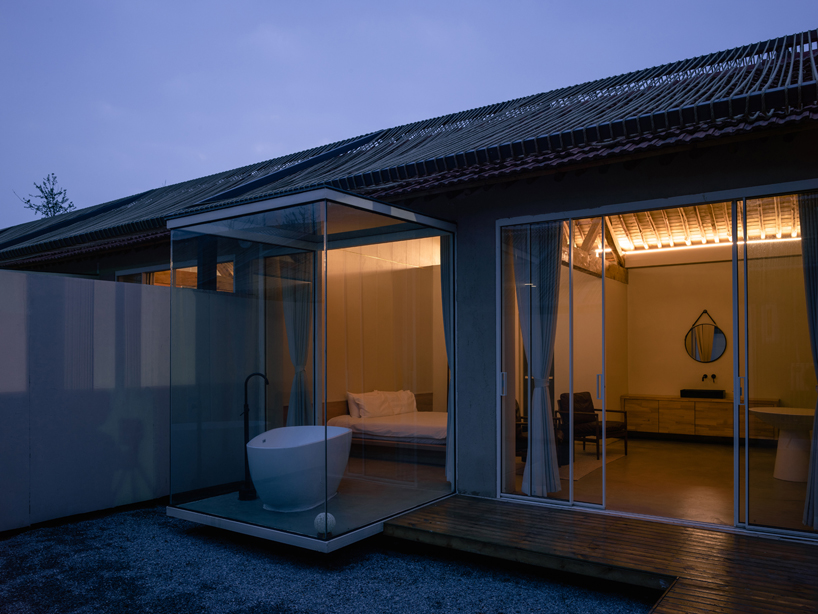