On Posted on August 2, 2022 by Terrance Hughes to Blogging

Amidst the rural area of Flanders, Belgium, Vincent Van Duysen has completed a modern winery that takes its cues from the existing landscape. Dubbed ‘Valke Vleug Winery’, the project is defined by its horizontal profile and spatial character that responds to the old agricultural buildings in this area. Thus, the resulting design echoes the notion of a traditional Flemish farmhouse infused with modern touches, which altogether forms an integral part of the rural heritage.

The final structure takes shape as a sequence of different masses. The barn and the farmhouse are the protagonists of the place, shielded behind four massive concrete volumes. The walls embrace a central courtyard — the heart of the winery according to the architects — which allows for events or peaceful moments with the sunset as a backdrop. 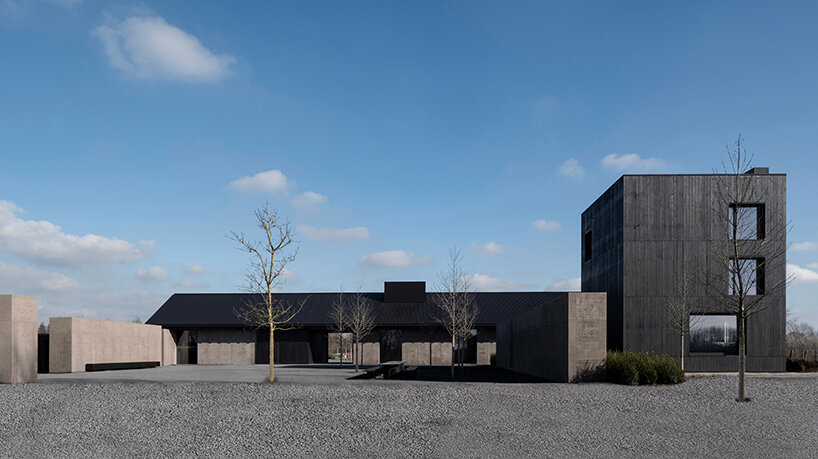 the project takes its name from the Valke Loop, a watercourse found on old registry plans as ‘Valke Vleugel’

Through the ‘VV winery’, the design team sought to form a sensory journey that pays homage to the old agricultural buildings in the rural area of Klein Brabant. The journey starts once visitors enter the courtyard through a gate that pierces the barn. Here, one can witness the coherence of the space with its nature and its arrangement. A central courtyard is unveiled in lava stone, obscuring the strict limits between artificial and natural.

The monolithic concrete walls were strategically positioned to create a feeling of privacy and security without compromising the outstanding views of the amorphous terrain. The rooftop terrace of the house captures views of the vineyards, providing misty landscapes, sunrises, and sunsets. As for the barn, the architects considered materials to form a feeling of seamless cohesion between its body and outdoor spaces. Large sliding windows, and a mute palette of cold hues that calms the eye, create the perfect atmosphere to host an area for a wine tasting space. The visible black wooden ceiling combines with the dark wall cladding and furniture, which creates a protected feeling in an open shelter. 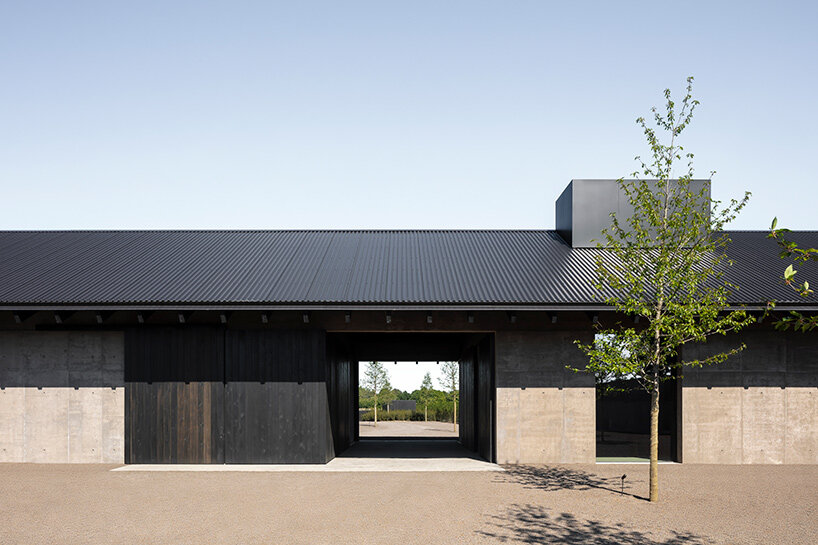 a pathway that leads visitors to the courtyard

a contrast to the lush green surroundings

The flawless horizontal quality of the site is interrupted by the dark wooden farmhouse, which brings a vertical formation into the otherwise flat directionality. The position of the old oak on the property contrasts the manmade farmland geometry, arising as a beacon for the vineyard. The black color of the residential tower makes reference to the old Flemish Barns traditionally painted in coal tar to protect wooden structures for a long time.

The design team opted for a timeless but contemporary material palette that gently blends into the present earth tones. Concrete, dark wood, and lava stone softened by the green surroundings complete the project while giving the structure its sharp, edgy modern character. The foundation of the buildings is made of concrete in a brown-grey color, which offers a visual coherence between the winery’s indoor and outdoor spaces.

For this project, Vincent Van Duysen followed a sustainable approach, investigating materials that would enhance the functionality of the vineyard. The concrete base is reusable, the pavement and heated zones are kept to an absolute minimum, and all wood is sustainable. 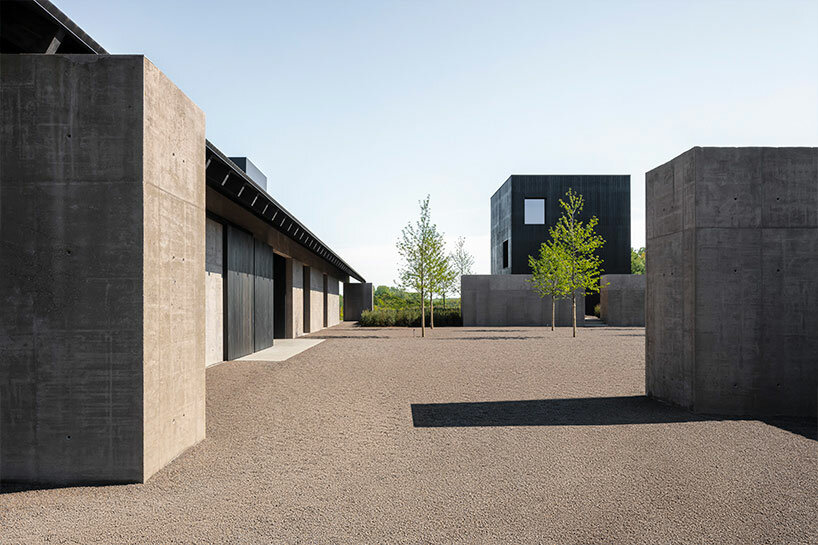 the square is the core of the project, a place to gather the grapes during harvest 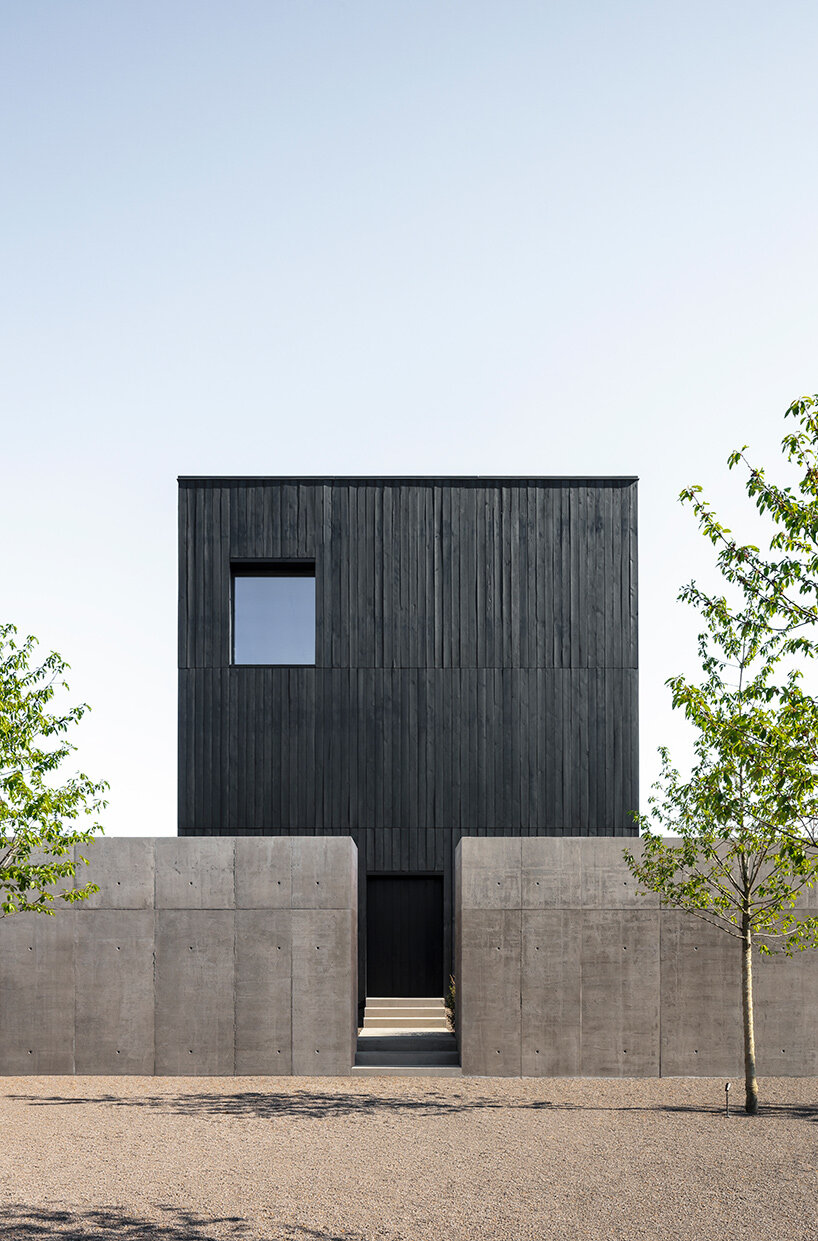